I just wish some of the American guys with no connection to Mexico would look there for opportunities instead of solely moving to Europe. It's a tough league to play in, and they would most likely have a tough transition period that would be a little bit out of their comfort zone.
Scuba Steve

Sean wrote:Both teams played like it was their first ever game in MLS. Still an enjoyable match though.

Toronto to win it all this year then?

See this is what I'm talking about son. Crushed their first game. But they've lost four straight, including a 3-2 loss to Dallas last week. It was an interesting game, Toronto were down by 3 within the first 27 minutes. But then the game was delayed for 3 hours in the 42nd minute. In the final minutes of the game, Giovinco decided to go HAM, scored two fantastic goals, nearly had a third. But so with 5 games gone, Toronto have 3 points.

Problem is they spend too much money going forward. Money in Altidore, Giovinco, Bradley means that there is no money for the defense. They are conceding too easily, and their attacking talent can't cover for it. I think they'll be able to turn it around and make the playoffs in the long run, but it definitely isn't going to be easy for them to do so. (The only team they are ahead of in the Eastern Conference is the Montreal Impact, who have two draws and two losses in 4 league games this season (all while advancing all the way to the Champions League final -- first leg tonight).
Free_Mustache_Rides

Yeah, when ever people go into panic mode in Mexican football forums because the MLS is signing international super stars and Mexican teams are signing unknowns like Alemao, they forget that for every Kaka or Giovinco in the MLS there are like 20 Peter Vagenas.

I'd go into panic mode too if this wasn't the case, which by the way I think won't be in like 20 years or so. But hopefully by then the authorities would have already found my naked body floating face down in a giant pool of butter pecan ice cream. That's kinda how I want to go out.
Scuba Steve

By the way, nice to see Blanco go out a winner in the final. Though I feel like the final should somewhat be invalidated, since the first goal came from Facundo Erpen (old D.C. United hack), courtesy of Orozco.
Free_Mustache_Rides

Puebla seems to have a knack of rejuvenating careers. The final was pretty exciting even if Guadalajara lost. I think it was a mistake to field a second string team in the final, I know that it was those guys that got them to the final in the first place and the classic is this weekend but I think Chepo made a mistake. Kinda funny that Chepo went with Torres and Aldo up front, it's like he didn't see the Mexico - US game. Herrera is like the 2.0 version of Aldo, so he should of known that wasn't going to work.

Man, I really need tiny Tri to beat your guys today. Although to be honest the squad doesnt look all that great. There's not that much first division experience in this squad.

I've been having a really bad couple of days football wise.
Scuba Steve

Forgot we were playing each other again. Our squad has a couple of bright spots, but there are others I would like to see there.

(ps, sorry about mentioning the final. Forgot your boys were in it. The Erpen/Blanco spin made me forget)
Free_Mustache_Rides

No prob. I'm surprisingly not that broken up about it.

And I had no idea they were playing, saw the commercials last night during half time. They're playing in my backyard too, weird how I didn't notice.
Scuba Steve

CONCACAF do the seedings weird though, and that's why America is hosting the first leg, when they were the second seed (behind my boys), and Montreal was the fourth going into the quarterfinals. But if there is an upset of the teams, the team that won assumes the seed for the next round.

So Alajuelense beat DC United in the quarters, which meant that they moved up to the #1 seed for the next round. That meant that even though Montreal was #4, higher than Alaj originally, that Montreal had to host the first leg of the semis, then head to Costa Rica for the second.

When Montreal won that tie, they then assumed the #1 seed, from Alaj through United. Which is why they then "jumped" America, allowing them to host the second game and not the first. Really weird way of doing business, but that's CONCACAF for you.

That being said, it doesn't matter if the first game was at Azteca (100,000 in attendance tonight) or the Olympic Stadium (60,000 tickets sold for next week), America is going to win this easily. Montreal has to win to have a chance next week ('11 RSL draw at Monterrey wasn't enough then for the return leg), which they just won't do.
Scuba Steve

Montreal take the lead, 1-0 in the 16th minute. Nacho Piatti with the goal.
Scuba Steve

Still 1-0 at half. America had a goal called back for offside -- I think he was on. But then a DOGSO incident at the end of the half ended with only a yellow for Martinez. Easy red.
Free_Mustache_Rides

Finished 1-1 as Peralta scored in the 89th minute. Stupid, stupid foul conceded by Romero on the side of the box, and Peralta headed home the free kick.

Good result for Montreal, but this was basically the same situation RSL had in 2011 (2-2 at Monterrey in the first leg), when they went on to lose the second leg at home.
Free_Mustache_Rides

Romero looked like an amateur footballer in a couple of plays tonight.

Oh he completely ruined the game for Montreal at the end, when they were trying to run the clock out. First, he was offside on a short corner that America wasn't even trying to defend all that much. Then, he played that free kick in America's end to no one in particular, when he could have at least picked out a teammate who could have burned some more time off the clock.

Then he dove into that tackle when there was little threat. He basically created the chance for America. Without it, they would have had to move the ball around again to try to find an opening. He cost his team big.

Also, apparently Bush got a yellow late on in the game, which means he will miss the second league. Montreal said they will appeal, but it won't matter. CONCACAF isn't going to overturn it. So Montreal will have some loan keeper from Edmonton in goal for the second leg. Goodnight Montreal.

And US babies won 3-0. Jordan Morris scored again against Mexico. Apparently we were shit in the first half, and then came out guns blazing in the second.
Scuba Steve

Second leg of the CCL final tonight. I'm expecting Montreal to get smashed, but it'll end 1-2 in favor of America.
Free_Mustache_Rides

I have a cousin who is so worried he's already making excuses by mentioning like a hundred times how good Montreal is. Lol

Goal there it is. Lol
Weather130

Montreal just scored and now is up 2-1 on aggregate, strange that no one is talking about this match.
Scuba Steve

Piatti with the magic. Good for Romero, it was his fault that America scored at the end of the first leg.

What a miss from Benedetto. I know it was bouncing, but he was right there. 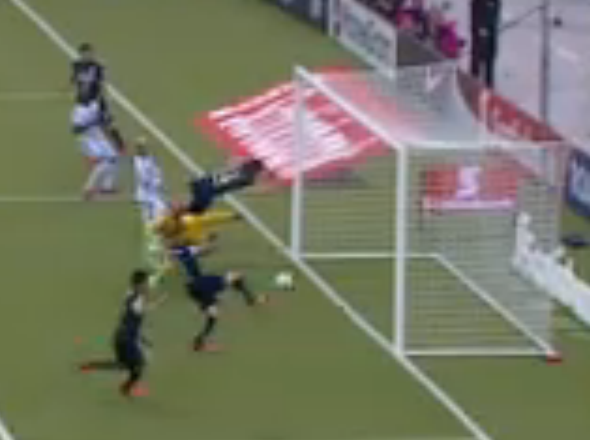 Bennedtto couldn't finish a sandwich. He'll have like one good game were he'll score a brace but the won't score against for the next seven. Don't like him, think Zuniga deserves a chance. Benedetto is a whole lot more mobile though so that probably plays a factor as to whynhe plays so much.
Scuba Steve

Did score 4 in that second leg against Herediano though. And Piatta stoned by Munoz with a chance for Montreal to go up 2-0.
Scuba Steve

America obviously should have scored here, but they are playing with fire on Montreal's counter. If Impact were crisper (or Piatti put that chance away), this game could be over.

45 minutes away from the biggest fluke ever.
Scuba Steve

Brilliant finish from Benedetto. 1-1 in the 50th.
Free_Mustache_Rides

Ugh, been critizing Benedetto all match and he just made me eat my words.
Scuba Steve

And Oribe ends the contest. No way Montreal score twice now without conceding.

Benedetto won't score for the next 7 games. Confirmado.
Scuba Steve

But 7 goals in second legs of the semifinal and final. That means he'll score 5 at the CWC.
Scuba Steve

Man, in my rant about Toronto getting off to a slow start to the season, I completely forgot that their first 7 games were all on the road, as they finish up the BMO Field expansion. Today was their final one, and it ended in a 1-0 win at Philadelphia. So now they've picked up 9 points from 7 away games (not great sure, but still good enough), with 17 of the final 27 games at home.

They should finally make the playoffs.
Scuba Steve

One thing I was definitely spot on about though was Orlando and NYCFC. After they drew their first game of the season against each other, and then both won the next weekend, they have combined to go winless in their past 13 games. Not good.

Like I was banging on about, just because you have David Villa or Kaka in your team, doesn't mean you'll be successful in MLS. Neither of these teams are good enough to make the playoffs right now.
Sponsored content