Galaxy won 6-0 last night after 'pids keeper Nasco was sent off in the 35th second. Gyasi Zardes scored two goals, taking his tally to 14, the most ever by a homegrown player, eclipsing the 13 scored by Diego Fagundez last year.
Sean

Scuba Steve wrote:Galaxy won 6-0 last night after 'pids keeper Nasco was sent off in the 35th second. Gyasi Zardes scored two goals, taking his tally to 14, the most ever by a homegrown player, eclipsing the 13 scored by Diego Fagundez last year.

Dan will be distraught.
Scuba Steve

I know. I shall alert him via twitter. That news just might upset him even more than the Sturridge news.
Free_Mustache_Rides

I remember watching Zardes in Concacaf and he looked so awkward. Guess he found his sea legs.

He's still awkward. Even up until June he still looked like he didn't know how to use his legs properly. But Bruce moved him up top, and he just started banging the goals in. Sure, it helps playing with Keane (wasn't there last night though), Donovan, Juninho, etc., but he was playing with them before and stuttering horribly. He's scored 13 in his last 15 games (all starts, subbed just twice).

And he's finishing in all sorts of ways. Headers, curlers, volleys. A couple of dummies and really intelligent runs last night led to his goals.
Scuba Steve

D.C. United also signed one of the enemies yesterday. Samuel Inkoom, Ghanaian right back who went to the World Cup in 2010 and 2014. He didn't play in the 2014 WC, but played against the USA and Uruguay at right back in 2010. Not the greatest club track record, but he's 25 years old, and with the team as solid as it is right now, no pressure on him to immediately come in and contribute.
Glen Miller

I find it funny that the Union is in a playoff position with 36 points from 27 matches.
Scuba Steve

That's what the parity is for. It's a bit annoying when average teams get into the playoffs and then win the whole thing.
Glen Miller

Scuba Steve wrote:That's what the parity is for. It's a bit annoying when average teams get into the playoffs and then win the whole thing.

Agreed.  If you go on any moderately long period of good form, you can sneak in.
dena

Zardes going to get capped in Jan. right?
Scuba Steve

Oh I think he might be called in for the games in October against Ecuador or Honduras. LA won't be happy if he and Donovan are called (well, Donovan would only play the first game), but JK don't care. But as far as in form strikers who are fit, Zardes is near the top of the list right now. Of course, he can't play the same role as Jozy, so JK has to figure something else out, but I think he deserves a look as he is going at the moment.
dena

Can he eventually? I mean, he looks like a big kid, I havent watched much non RB MLS year to accurately judge his style.
Scuba Steve

Don't think so. I mean, LA went out and got Alan Gordon just for that reason, I think. He's got the speed to chase down long balls, but he's not really an outlet for hold up play like Altidore now. He's probably tall enough, but think of Cooper. Never developed that into his game. Always loves facing towards goal, taking defenders on, looking for open space to make a run into. I was looking for a video of some of his goals all in one video (to no avail), but while he is sometimes involved in the buildup to his own goals, I don't think it's ever been from receiving a long ball, holding it up for others to get involved, and then converting a chance at the end.

Suppose he could bulk up and add that in, just seems unlikely that he'll be asked to do that with Gordon in the team for that specific reason. Even when it's him and Keane starting, they don't play that many longs balls with Donovan and Husidic able to carry the ball forward with Juninho and Sarvas distributing.
Scuba Steve

EJ out with a concussion, Rolfe out with his broken arm until October, so Chris Pontius' return to the lineup for the first time since the last game of the 2013 season is perfectly timed for tomorrow's game against New York. Here's to NY finally getting on the scoreboard against DC this year.
Scuba Steve

Tonight is the 125th Mexico match in the USA since 2000, compared to 68 in Mexico in that time


Surely Mexico is the only country with a stat like that.
Free_Mustache_Rides

Scuba Steve wrote:Tonight is the 125th Mexico match in the USA since 2000, compared to 68 in Mexico in that time


Surely Mexico is the only country with a stat like that.

I couldn't find it but a few days ago I read that they signed another like 4 year contract to keep playing in the US or something.

At least, I think that's what it was about. Don't remember that well, just glance at it.

Who knew nostalgia could be so profitable.

Suck it, dena. Fabi should still be on the field. Nice of Roy to get his filthy paws around the throat of Arnaud as well.
Scuba Steve 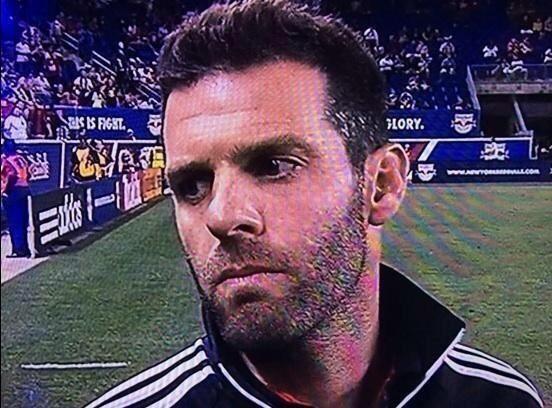 It did take you 268 minutes, (56 of which were against ten men) to score against United this year. So we will let you have the short term success; you'll lose to the Union this weekend, which was a game you needed more than beating us.

It's funny too, since Espindola will likely get his red card rescinded (even Dax admitted it wasn't a red card. He caught him with his boot, but the cleats were faced the other way. High boot, nothing more. Yellow card), while Roy Miller will get suspended for putting his hands around Arnaud's throat. Tsk tsk tsk, Mark Geiger just has never been the same ref that we saw at the World Cup.

Some noob also tweeted out yesterday in response to someone, something about how Geiger has been to a World Cup, how many has Ben Olsen been to? Such a short term memory some of these new soccer fans have when it comes to soccer in the states. The dude also claims he used to work for Sky Blue FC, so there ya go with New Jersians.
dena

Yeah, NWSL is still around, holmes. Sky Blue tried to reach a deal with NYRB earlier this year, surely to help with the finances and such, but it didn't work now. Now they're trying to get in bed with NYCFC, which makes much more sense from a branding standpoint.
Free_Mustache_Rides

I know about Sky Blue 'cause my soccer crush Rangel plays for them.

Also, earlier I read some dude claim that Zardes is now the best American striker in the MLS. Man, I swear you miss a few MLS games here and there and come back to bizarro world.
Scuba Steve

I saw some angst to go along with that claim as well. At first I agreed, but there really isn't much competition right now as far as American strikers go (He did also score last night, 15th overall, 5 in his last three games).

Magee has been injured or inefficient for most of the year (and now out until next season), so he isn't in the mix either. Will Bruin can score goals, but he's hardly dynamic in the way Zardes can be. More of a Heskey or Yakubu type.

Wondolowski is really his only competition this season for the title of best American striker in MLS. But with Wondo, I feel like there is still some bad juju with him and USA fans for the Belgium game. He was presented with the only job he had in the World Cup, and he didn't even challenge Courtois. Is his overall game still better than Zardes? Probably. And I can't imagine that Zardes will ever score 27 goals in a season like Wondo did. But he has played well enough to earn or at least be in the conversation (not that it means much) this year.

(Also, the foreigners score all the goals in MLS. At least this year.)

JK said today that he is going to try to take the strongest team possible for the October friendlies. I think Zardes should still go along with that team, but I believe now that JK won't bring him in. AJ is still out, Altidore is misfiring, but with Dempsey not fazed out yet (though I think that'll start slowly happening next year), and JK's insistence of a 4-3-3, I don't think now that he will be called in. Which is a shame, think he has a right to be there. January is looking more likely now for him.

Here's the video that went with what Che was talking about.

Also, had to look her up. Good choice Che. But she doesn't play with them anymore, apparently. Wiki doesn't list her being on a team. Does her twitter profile (https://twitter.com/nayeRangel7) say she's a Tigre supporter though?

And my crush has always been Ali Krieger. I went to a couple of soccer camps her dad held, and then me and a couple friends used to go watch her play for our high school back in the day. She was the best player on the field (which is why we actually went), but she's also rather easy on the eyes.
Free_Mustache_Rides

I think Marco Fabian was dating her a while back, that or they're really good friends. A while back Fabian got in a bit of trouble for taking of his shirt and having a "get well" message written on an undershirt dedicated to Rangel.
Scuba Steve